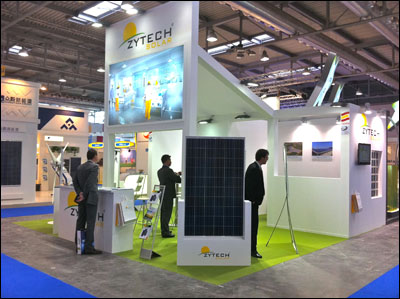 Zytech Solar, the Spanish manufacturer of photovoltaic modules, presented its products and systems at the Solarexpo & Greenbuilding 2011 International Fair which held its 12th event at the Verona Exhibition Centre from 4 to 6 May. The major new development that was presented at the event was a new glass-glass module with different coloured cells for building integration.

Zytech Solar presented an attractive photovoltaic catalogue on a corporate stand that was especially designed for the event. Various solar products were displayed in the space, which included the Zytech high quality and reliability photovoltaic modules, building integrated photovoltaic solutions (BIPV) and its wind generator, the 1 kW Zytech Aerodyne. The stand, a new design, displayed the latest monocyrstalline and polycrystalline silicon photovoltaic energy technology, and some of the installations built using Zytech modules were displayed from Spain, France, Germany, Belgium and Holland. More than 700 people visited the Zytech stand and were attended to by the Zytech specialist commercial team over the three days of the event.

This has been the third occasion that Zytech Solar has taken part as an exhibitor at the Verona Solar Fair, the most important in Italy, and one of the three most significant in Europe. This event is creating an increasing amount of interest and anticipation among the public and businesses. As the figures confirm: 71950 people visited the fair this year, 4% more than in 2010, 1400 exhibitors, 11 pavilions, 130,000 m2 of exhibition space and more than 300 accredited journalists.

This fair has been an excellent opportunity to consolidate and establish contacts within the sector, a few months after opening the new Zytech Italia subsidiary in Milan. Zytech Solar would like to thank all the visitors and guests for visiting our stand.